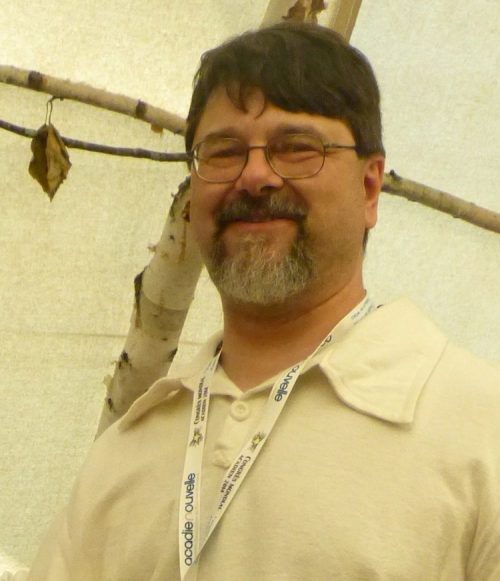 Tell us about yourself and your involvement in the Acadian Community?

I am the Director of the Madawaska Public Library. The library is one of the main archives for genealogical records for the Upper St. John River Valley- a place that was founded by Acadians. Madawaska- or more properly St.David/St.Basile- was the spot where the initial settlement was built. Being a Historian by trade, I was always interested in the story of the Acadians, who were a people who only wanted to be left alone but were continuously swept up into global politics and struggle. At the moment, our chief concern is to halt the erosion of our culture to the creeping assimilation that is overcoming us. Failing that, we are attempting to preserve as much knowledge as possible, and create interest among the younger generations, who are consistently being pulled away from us. Towards these aims I work sometimes by myself, but often with others in such groups as the Maine Acadian Heritage Council, the Madawaska Territory Historical Society, and the Madawaksa Maliseet First Nation, among others.

How and When did you first meet Yvon Cyr, Founder and Original Creator of Acadian.org?

I never met Yvon, except as an online presence. He and I often bounced ideas off each other, I trusted his views on what would “work” and I think he trusted mine. We also found in each other someone else who was knowledgeable enough to know when people were spreading- willingly or not- a lot of the myths that unfortunately surround the Acadians.

What is your area of specialty when researching Acadian history?

I don’t know if I have a specialty… I have the resources to refer to for genealogy, but I know most of the history, especially the interaction between the Acadians and the Wabanakis. I would say if I have an area I know less about it would be the relatively quiet period between the mid 1800s to the modern era.

How did Yvon’s research help you?

Yvon’s website was exceptional and served as a site that I could refer people to when they needed sources to prove or disprove something. I always wondered how he found the time to create such an expansive site.

What is one piece of Acadian history you wish more people would be aware of?

The one piece of history I wish people would understand is that it was American Colonial governments that were behind the “Grand Derangement”. Only twenty years removed from the American Revolution, that knowledge should make people look at the colonies is quite a different historical light. I get in to some very heated arguments with people who only want to believe the dastardly British were at fault!